Ticket reselling (or ticket brokerage, as it's also referred to) is a useful business to look at for many reasons. It's a simple product to understand. It's easy to relate to—many of you have probably bought tickets on the secondary market at some point. And it allows us to see some simple economics in action.

Ticket brokerage might seem like a relatively easy business to manage. It's not. There are certain parts that are relatively straightforward indeed. As Holzman described, figuring out the supply of tickets is not particularly complicated since there is a limited supply of seats in a stadium. However, getting a handle on demand is another story.

What price should Ace set for its tickets? How should it vary prices for different seats? And how should it vary prices over time? Ace Ticket's pricing problem is more complicated than for most businesses, since it's setting prices not just for one seat, but for hundreds of seats, and it's changing prices frequently, sometimes even hourly. In comparison, pricing decisions in many other settings are made far less frequently and for fewer products. But exploring Ace Ticket's problem can help shed light on many ideas in the "economics of demand." So we'll use ticket brokerage as a setting to introduce some important concepts in economics that are useful in many other settings and you'll be on your way to learning some real economics.

So, do companies get prices right? Managers often struggle to figure out the right price for their products and are unsure even after the fact. Did The New York Times set its subscription prices for online news too high or too low when it began charging for its digital products in 2011? Could Apple grab significantly greater market share if it were to lower prices for its products?

Let’s explore this question by looking at Ace Ticket’s prices for a particular game.

The map below shows Ace Ticket's prices for a professional hockey game. This wasn’t an ordinary game: the Bruins, Boston’s pro hockey team, were set to play the Chicago Blackhawks in Boston on June 19, 2013 in the pro hockey championship series. Not surprisingly, regular tickets were sold out and many fans in the Boston area were desperate to get tickets from brokers like Ace.

Put yourself in Jim Holzman’s shoes. You’re trying to figure out what prices to charge. 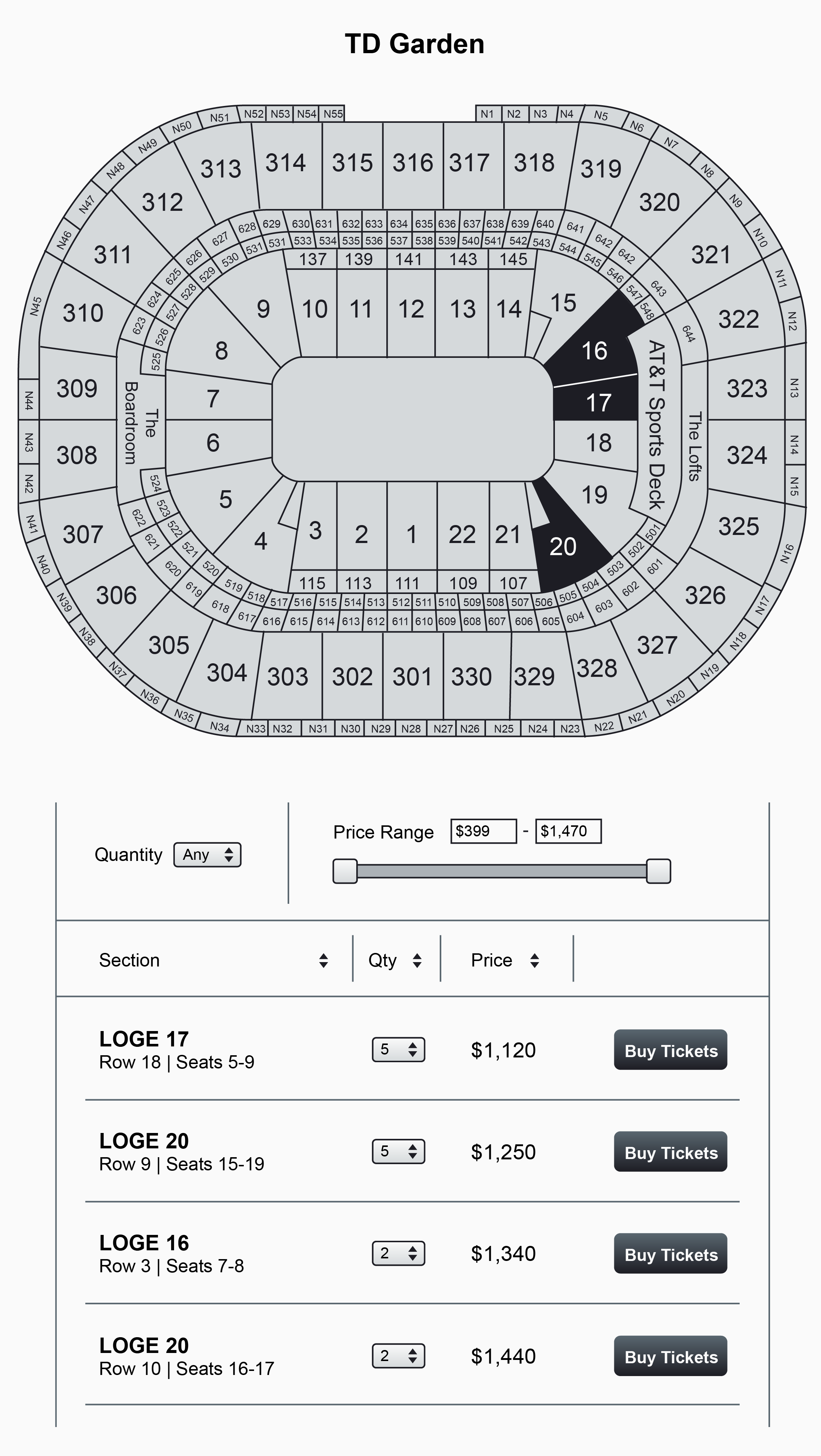 As you can see, Ace Ticket’s website shows what seats are still available and how much they cost. The cheapest tickets in the illustrated section of the arena were available for $1120 and the most expensive were $1440.

The question is, was Ace charging the right price from its standpoint?

It’s often tempting to look at product prices and jump immediately to a conclusion of whether they’re “too high” or “too low.” Ticket prices greater than $1,000 for a single game appear outrageously high if you think about what else a customer could do with that money. For example, she could buy a new premium refrigerator, a 50” high-definition LCD television, or round-trip plane tickets to Florida. On the other hand, the prices might be considered too low if, for example, you believe that Boston fans are sports-crazy (which they are) or if the demand for the product far exceeds its supply (which it did for this game).

All these arguments appear reasonable. However, by themselves, they don’t tell managers much about the answer to the question of whether their prices are “too high” or “too low.” If, for example, nearly all customers consider $1000+ prices for a single game to be outrageous, then Ace would be pricing too high. If, on the other hand, enough fans viewed these tickets as a once-in-a-lifetime opportunity for which they’d pay far more, then Ace could be leaving a lot of money on the table.

The key point is that for firms to know whether they’re making pricing decisions correctly, they need a benchmark against which to evaluate prices. It would be very useful to first know how much customers are willing to pay for their product. Prices, by themselves, tell you almost nothing about the answer to the question of whether they’re right or not.

The idea that we need benchmarks against which to evaluate economic decisions is a very general one, and it's an idea that we’ll see over and over again. For example, we might observe a company's profits, but that alone doesn't tell us how well the company is doing. We'd want to know what kinds of profits other companies in its industry earn. Profits, like prices, are merely outcomes that we observe in a market.  In order to understand whether these outcomes are sensible or not, we first need to better understand the primitives of the problem; in this case, what customers are willing to pay for tickets in the first place.

We'll return to the distinction between market outcomes and primitives later, in other contexts. But first, let’s explore further the idea of customer willingness to pay.

Let’s say you had a chance to buy a ticket to an event. It could be a football game. It could be the national figure skating championships. Or it could be a music concert.

Ace Ticket has offered tickets for all these types of events. Indeed the problem of “figuring out demand” that Holzman described is far more general, it turns out, than just pricing football games.

Let’s explore the customers' willingness to pay for events like these. First of all, we'll consider the game we started with—the New England Patriots versus the Baltimore Ravens in the AFC Championship.

Someone’s got an extra ticket and is giving you the first chance to buy it. You can only make one offer and if it’s not accepted, the ticket goes to someone else.

As another example, let’s consider a concert—Taylor Swift is coming to town. (For those of you who don’t know, Taylor Swift is a country music star, one of the most popular performers of the last decade, who’s sold more than 75 million digital single downloads, making her one of the best-selling artists in history.)

Swift’s concert in Boston was sold out within hours of tickets going on sale. But of course, tickets were available in the resale or secondary market. And that’s where you find yourself.

Again, someone’s got an extra ticket and is giving you the first chance to buy it. You can only make one offer and if it’s not accepted the ticket goes to someone else.

The number you just keyed in is a very important one in economics. It’s what we call the “willingness to pay” (which we’ll sometimes denote for short as “WTP”). It’s the maximum price you are willing to pay for a product or service. Of course, you’d be glad to pay less than your “willingness to pay” if you could, but the important thing is that you wouldn’t pay more than it.

Thanks for completing this brief lesson. Ready to earn your certificate?
Learn More